How Prescription Drug Rebates Work … But Don’t “Work” for YOU

Have you ever gone to a restaurant with a friend and split the bill?  You go, order a meal, talk, and when the check comes your friend says “let me put it on my card, and you can just give me half in cash.  It will save me a trip to the ATM anyway.”  It’s a normal enough interaction and if the total bill plus tip was $40, you fork over a $20 for your share.  In some respects, this is the way standard copay and co-insurance models are intended to work at a doctor’s office or for a hospital stay.  The bill comes, it’s for $1,000, your coinsurance is 20%, so you pay $200 and the insurance (your friend) covers the rest.  This is how health insurance works…most of the time.  It’s just that this isn’t the way it works in the pharmaceutical industry.

Most people probably think that the pharmaceutical industry should work something like the diagram below.

How We May Think the Rx Industry Works 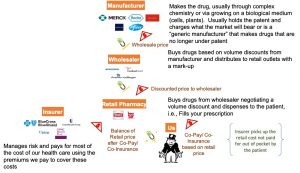 How the Rx Industry Really Works 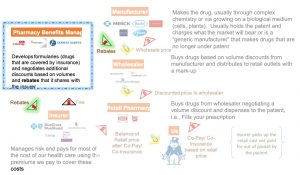 In the middle of these transactions sits a Pharmacy Benefits Manager (PBM).  The PBM helps insurance companies choose formularies (the lists of drugs the insurer will pay for) based on multiple factors.  Some of these factors are clinical (Drug A is better than Drug B at treating a disease).  Some of these factors are based on very standard cost concerns (Drug A and B are equally effective, but one costs less than the other).  And some are based on undisclosed discounts and rebates, e.g., if the PBM gets to a volume of X on Drug A, the PBM will get 25% of the costs back as a rebate, which can be shared with the insurer.

Above board discounts and rebates would not cause problems.  Let’s say your friend had a coupon for $10 off when you bought two entrees.  The price of the lunch would go from $40 to $30, and you would each pay $15.  With the undisclosed rebate, however, you don’t get the benefit of the discount or rebate.  All of the benefit goes to your friend (Your friend pays $10, you pay $20).

In most cases when you have insurance, you have an agreement to cover part of the costs, e.g., copay or coinsurance. The insurer covers the rest. Because you really don’t know what the net cost is to the insurer, you may be actually covering more than the amount you agreed on.  When there is a copay and the cost of the drug is low, you may be paying more than the actual cost of the drug to the insurer in the first place.

The Trump administration seeks to limit use of such rebate agreements.  The impetus is that current agreements often do not result in sound prescribing practices or fair market tactics and competition.  Such agreements can induce insurers to put more costly drugs on formulary.  After rebates and copays, the cost of some brand name drugs –to the insurer— can be lower than generic alternatives.  The patient on the other hand may end up paying more.

The equivalent is your friend recommending going to the restaurant where his credit card gives him or her the rebate, even if the food is worse and more expensive.  After the rebate, it is almost free for your friend.  You, however, are stuck with a big tab, bad food, and an even worse taste in your mouth.

There are likely to be many on the left (or in the party that begins with D) who don’t care for this change in policy because it comes from an administration that begins with “T”.  We do not suggest that the changes proposed are perfect. More specific implementation plans would be helpful for analysis.  We only urge critical analysis of the proposal on the merits of the proposal itself and its goals rather than its political source.  The proposal is a solid start towards increasing transparency in drug pricing.

Please give us feedback

We know we have oversimplified.  There are nuances and complexities we did not delve into; but we did so because we didn’t want to lose sight of our main purpose.  We believe we captured the gist of the dynamics of product (medicine), money, and information flow in the pharmaceutical industry.  As specifics become clear about the proposals, we will update.  As points are made in response to this article, we will respond so that we can keep the discussion going.  We look forward to a virtual dialog with the readership.

Becoming a member, signing up as a partner or sponsor, and joining us at an event are all great ways to connect with what PBGH is doing in your community!

Not a member yet? Sign up for exclusive benefits and a library of knowledge from local business owners just like you!